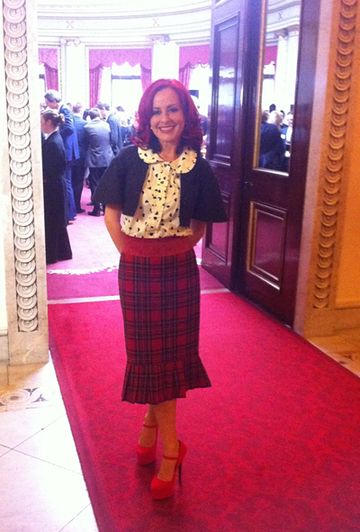 When I was first diagnosed with CD at 20 years old I was relieved - pleased that I finally had a name for the symptoms I was experiencing. I'd been ill for two years and, like many people with Inflammatory Bowel Disease, it took ages to diagnose - numerous doctors, hospital tests and various remedies - none of which helped the symptoms or relieved the pain.

Sad to say times have not changed and I still hear stories of people taking years to be diagnosed. Girls being accused of having eating disorders only months or years later being told they have CD. They are then left to deal with the fall out of not having been believed and their families feeling terrible for having scrutinised their every meal.

One of the hardest things about having this disease is that no one wants to talk about their bottom and certainly not what comes out of it. You feel ashamed and isolated. my life felt as though it had been reduced to pain management, hospital visits and sitting on the loo for days on end!

I think half the battle with CD is finding the mental attitude to deal with everything that's thrown at you. Today we call it learning to self-manage but back then no one talked about this and you were at the doctor’s mercy, positionally weak and seen as a burden.

Today in Europe 40%of the population have a chronic disease by the age of 15yrs* so a huge percentage of us are dealing with ill heath at a young age. The key is learning to gain control, learning how the medical system works and finding out what therapeutic pathways are on offer. To begin with you feel bombarded and it takes a while to move from crisis, to getting on top of things to feeling like you are the leader of your own health.

ou are now at the beginning of a very long and sometimes frustrating journey. Remember, the key is to learn how to own your illness without being defined by it. There is the fight in your body but the fight in your head is where the real battle takes place. Life is not over; this will not be the sum total if everything you do. So stand strong, when you go to see your specialist remember you are not a victim - you are the expert client because no one knows your condition better than yourself.

The charity Crohn's and Colitis UK are a huge help.

Thank you for your enquiry. We'll be in touch soon.